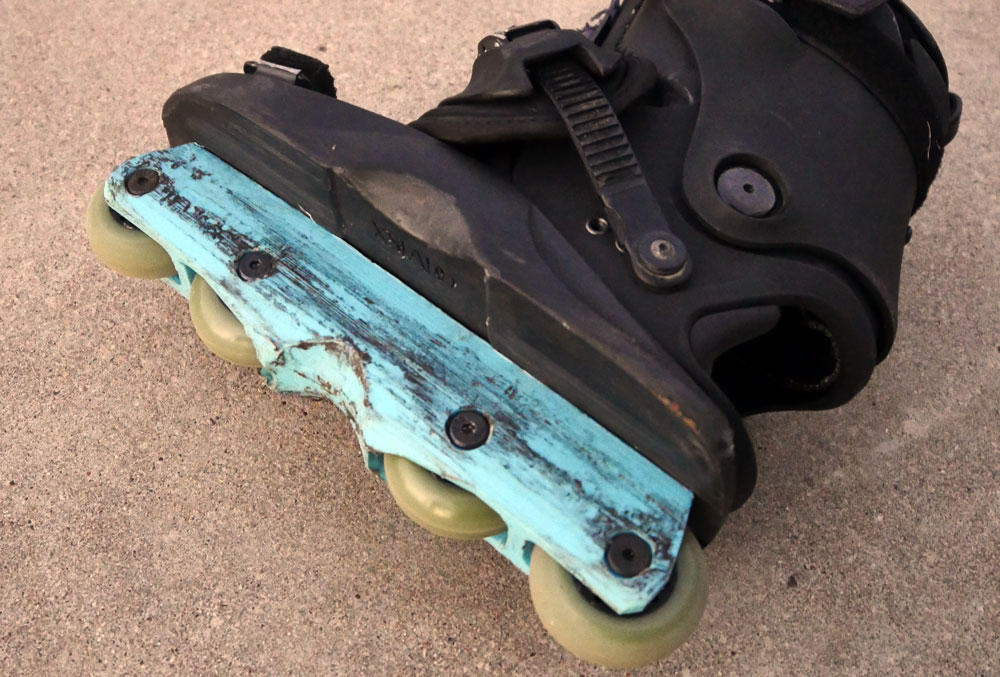 Previously, I floated the idea that frames can/could/should be printed cheaply using an FDM/FFF printer with PLA0 and then strengthened using one or more of a variety of techniques- which would yield an inexpensive, fully compostable/disposable skate part, to be manufactured on demand anywhere by anyone with electricity and a basic printer.

I thought this was going to be difficult, would require strength-adding design compromises and might take a lot of trial and error to make work for more than just a session or two, despite PLA's rigidity and technically ideal mechanical properties. Printed stuff, after all, tends to be a lot less sturdy than the injection-molded equivalent. I'd been FDM-printing grind parts for years, but never even considered it for an entire load-bearing frame -- FDM-printed PLA is just too weak and brittle to support axles, right?

Well, a while back Corey Gibson printed some functional aggressive frames in PLA with a light infill. They stood up to some use and didn't break under him immediately.

Then, a couple months ago Justin Thursday came along and did exactly this with a full carbon soul-frame design, printed using 100% infill, annealed avec heat gun.

Not only can durable, fully functional, load-bearing PLA hardcore aggressive inline skating frames be produced with a cheap FDM printer, but it actually doesn't take much extra effort.

The critical steps are: 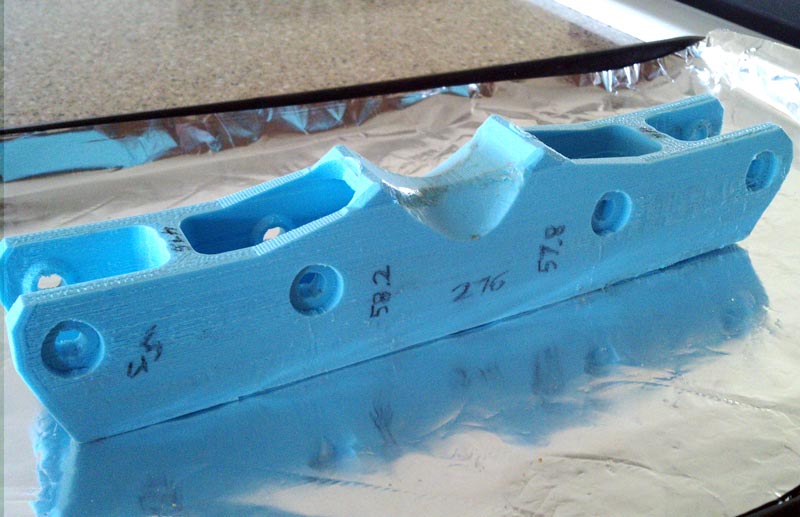 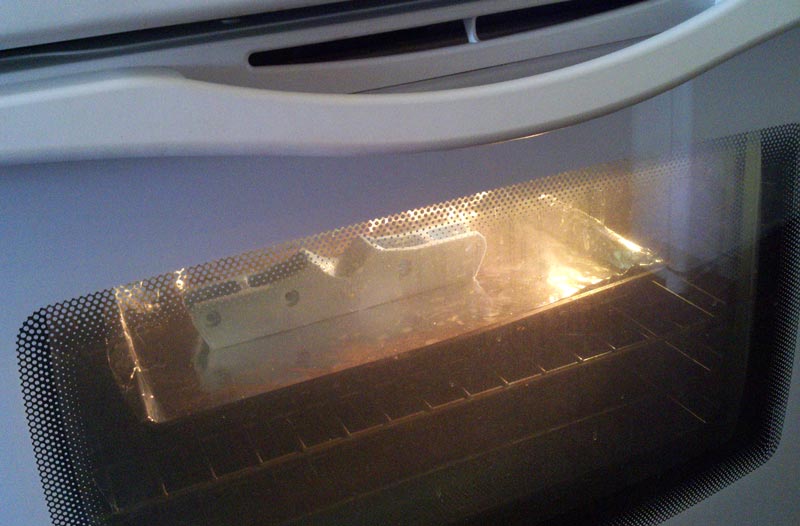 That's really all there is to it. A printed PLA frame feels, and- as anticipated, slides more like polycarbonate than the nylon-fiber or UHMW you might be accustomed to: it's considerably more rigid and slides much faster. Make no mistake, full-on PLA rivals acetal's slipperiness for grinds. 60mm max wheel size seemed like a good format to start with: not too tall and fairly conventional for an aggressive frame. I took the wheelbase and spacing from starscream's CA060 frame design1, added built-in spacers, a lot more wheel bite protection, shallower backslide edges, and denser minimum thicknesses so that high stress points have at least 12mm of solid reinforcement.
Enter the FDM60: 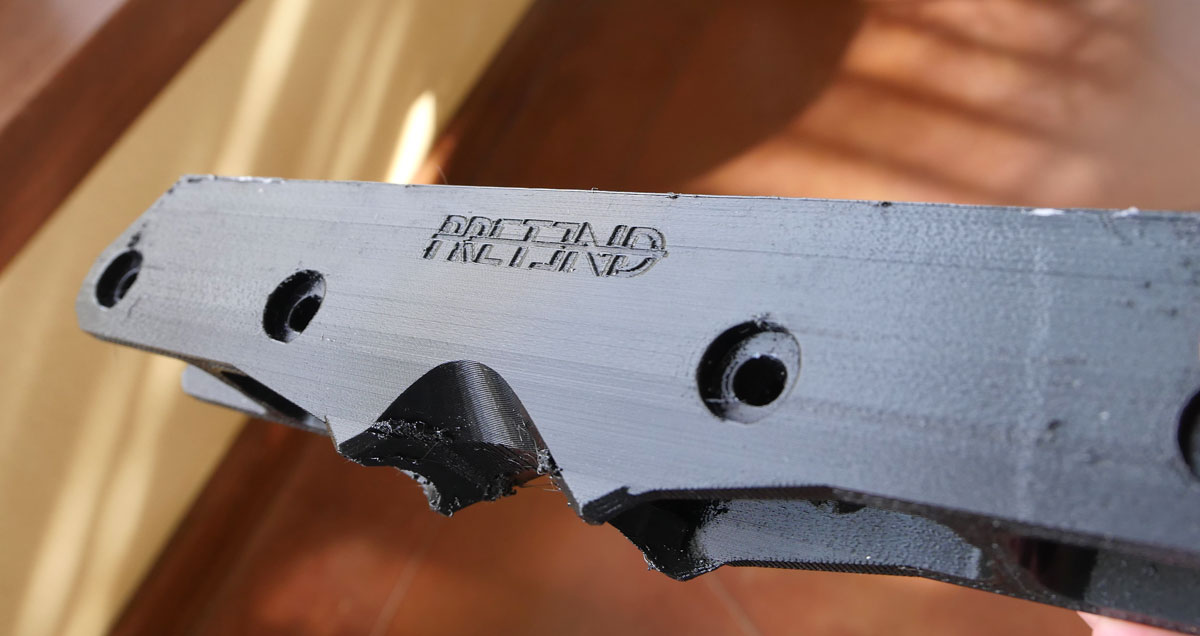 Aside from creating denser bolt-area thicknesses, the great thing about built-in spacers is that they reduce the number of required parts and initial setup time. Some kid in Somalia only needs wheels, bearings, and something resembling bolts to make these things go.

I already consider this first test pair a big huge success, having put around 12 20+ hours on the frames over a few sessions several weeks of park and a few street sessions.

Each frame took just over 22 hours to print. This could be accelerated to around 12-13 hours apiece on my ghetto Prusa i3 mk8 clone, but I wanted to make sure they turned out accurate and solid. Some fast printers could probably produce each frame in 3-5 hours.

How much do these weigh?

Roughly the same as the injection molded equivalent, albeit on the heavy side:

There's definitely room for 10-15% lightening without much structural change -- the v1 goal was simply to be strong enough for normal use.

How much do these cost to make?

A little over 5 USD apiece, including electricity:

These are highly cost effective to produce with little setup expense. Lengthy production time is the obvious drawback.

The frames do appear to be wearing a bit faster than a typical nylon job, but that's expected. These are compostable, after all. 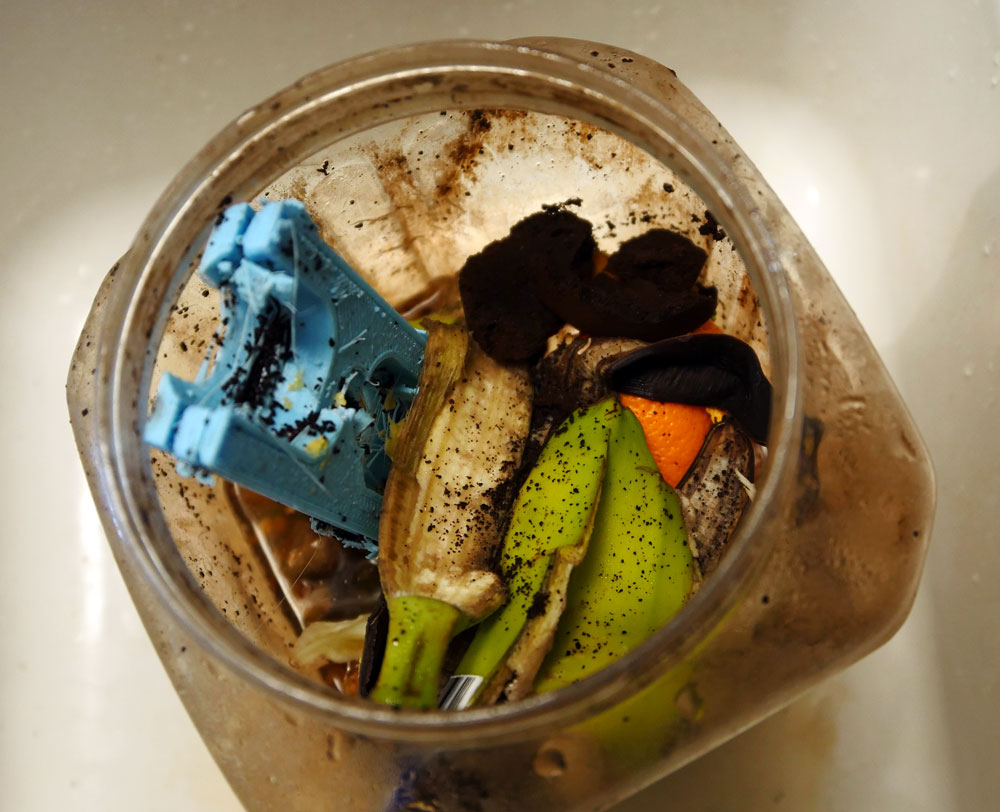 Download printable FDM60 STL (released under CC-BY-SA as a derivative work)
On Thingiverse
If you don't have a printer but want to try the frame, consider taking this file to a nearby hacker/makerspace, where they almost certainly have one or more FDM printers.

Print mount side-down/groove side-up with support, 100% rectilinear infill (yes, 100%!), 0.2mm layers, 3/4mm nozzle: you'll need a machine with an X or Y dimension of 280mm+. Be sure to bake the finished parts before use. 200°F for 10 minutes is probably a good starting point. Since the prints will probably shrink after baking, scaling to X and Y printing dimensions of 102% (or more) is recommended.